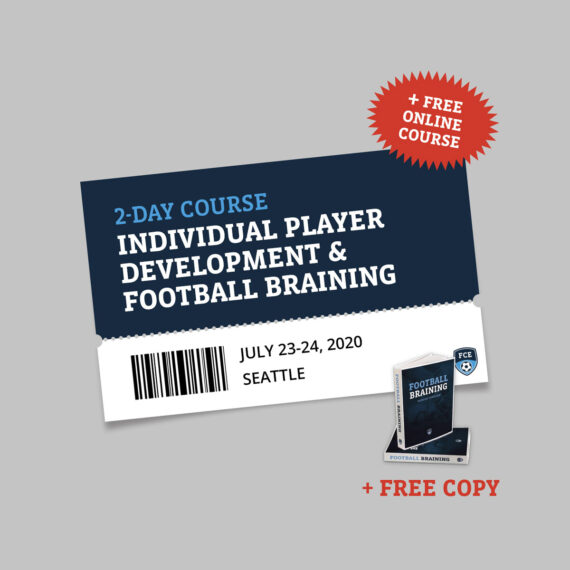 In football, communication between players is of the highest order. This verbal and non-verbal communication is trained in tactical training sessions. In such tactical training, the coach teaches his players a tactical reference in terms of WHAT they are supposed to do together when attacking, defending and transitioning. For example, if the team tactical reference is ‘disturbing the build-up of the opponent horizontally’ it means that players have to shift from left to right or from right to left. This is WHAT players are supposed to do. But HOW each player shifts horizontally can not be determined in advance by the coach because football is not a game of robots. The HOW of football actions in terms of position, moment, direction and speed is the responsibility of the player. It is the decision making (game insight) and the execution of decisions (technique) by individual players within the team tactical reference. This is something else than developing the communication between players (tactics) but it still does take place within the team tactical training. In other words, it is the individual training within team training.

Dutch top coach Louis van Gaal has won many (inter)national trophies with Ajax, FC Barcelona, Bayern Munich and Manchester United. In 2014, he reached the World Cup semi-final in Brazil with the Dutch national team. As coach Van Gaal has reached the last phase of his career he is now thinking about how to leave a legacy for the next generations of coaches.

Top coaches often share their expertise with other coaches based on subjective opinions and experiences. As a result, coaches often struggle to apply this subjective information of top coaches in their own environment. Therefore, coach Van Gaal decided to try to translate his coaching knowledge and experience in more objective and reliable coaching references with the help of Raymond Verheijen.

Over the past 18 months, Van Gaal and Verheijen had ten 3-hour sessions discussing and analyzing Van Gaal’s coaching of his ten teams. The role of Raymond Verheijen was to theorize the countless coaching situations into general and objective coaching references. Theorising means the analysis of multiple similar situations to try to identify what all these situations have in common. One extrapolates the objective characteristics and leave out all subjective elements like the personality and opinion of the coach as well as the specific context. The result is an objective coaching reference.

An objective coaching reference is a coaching principle that is always true and does not depend on the coach or the context. This allows the coach to trust this information much more than the subjective experiences and anecdotes which are normally shared between coaches.

Coaches who register for both 1-day courses will get a free copy of Raymond Verheijen’s new Football Braining book which will be launched at the FCE ProCourse at Real Madrid next June.