View Cart Wie einfach kann es sein? has been added to your cart. 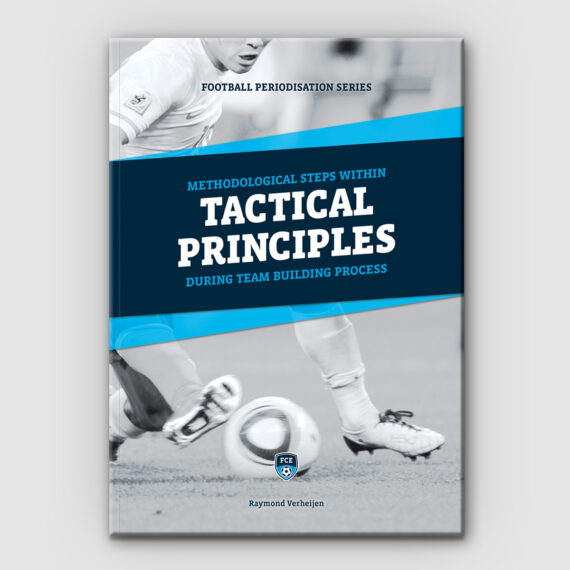 In this book, we will pay special attention to tactical principles and the methodological steps within these principles. This knowledge will allow coaches to describe, explain and solve tactical problems much more purposefully.

Book orders will be sent on Monday August 16

Just imagine asking the delegates in a coaching course why they are taking that course. Most of them will say that they want to become a better football coach. They want to improve their coach actions. But what is a coach action? What would happen if all coaches wrote down what they understand by a ‘coach action’? Asking the question is answering it. What does it mean if someone wants to improve ‘something’ (coach actions) but cannot clearly define that ‘something’? The logical consequence is a less purposeful development of that ‘something’. If you do not have a clear picture of the structure and hierarchy of coach actions, improving coach actions is nothing more than a random process of trial and error similar to children learning to play football in the street without the guidance of a competent coach.

It is not for nothing that many people call coaching an ‘experience profession’. The consequence is that coaches only ‘learn’ from what they do experience and not from what they do not experience. This results in one-sided or limited coach development. In addition, coaches will develop all kinds of illusions (‘bad habits’) as a result of incorrect interpretations of these subjective experiences. The logical consequence is that the development process of many coaches is a bottom-up, inefficient, purposeless, random, unconscious learning process. Just like with children playing in the street, competent top-down guidance is the solution for football coaches. But competent coach education is only possible based on a deep understanding of the anatomy of a ‘coach action’.

In the first part of this book, we will discuss the different phases of a coach action. Based on this hierarchy, multiple coaching tools will be introduced and explained in the second part of the book. These tools will enable coaches to be much more purposeful during the different phases within their actions. We will pay special attention to tactical principles and the methodological steps within these principles. This knowledge will allow coaches to describe, explain and solve tactical problems much more purposefully.

Raymond Verheijen developed his thinking behind this book with the help of his mentors Bert van Lingen (KNVB) and Jan Tamboer (Vrije Universiteit Amsterdam). After a successful career both at club level (Manchester City, Chelsea, FC Barcelona, among other clubs) and national team level (Holland, South Korea, Russia, among other countries) assisting coaches like Louis van Gaal, Guus Hiddink and Dick Advocaat and many others, Raymond Verheijen (1971) developed himself as one of the world leading philosophical thinkers who stand above all parties and can, therefore, develop football knowledge and references independent of external factors such as culture, traditions, opinions and personalities.

This website uses cookies to improve your experience while you navigate through the website. Out of these, the cookies that are categorized as necessary are stored on your browser as they are essential for the working of basic functionalities of the website. We also use third-party cookies that help us analyze and understand how you use this website. These cookies will be stored in your browser only with your consent. You also have the option to opt-out of these cookies. But opting out of some of these cookies may affect your browsing experience.
Necessary Always Enabled
Necessary cookies are absolutely essential for the website to function properly. This category only includes cookies that ensures basic functionalities and security features of the website. These cookies do not store any personal information.
Non-necessary
Any cookies that may not be particularly necessary for the website to function and is used specifically to collect user personal data via analytics, ads, other embedded contents are termed as non-necessary cookies. It is mandatory to procure user consent prior to running these cookies on your website.
SAVE & ACCEPT
[class^="wpforms-"]
[class^="wpforms-"]